Supatrax offer a range of DJ Workshops for all ages and ranges of music.

Photographing clubs Nationally and Internationally since 2001

Supatrax can provide entertainment for youth and school events.

England’s black footballers have been branded “sell outs” by a Nigerian journalist for dating white women!

In light of the highly publicized break up between Cheryl and Ashley Cole, Uche Nworah (an acclaimed journalist who has worked with the BBC and lectured at some of the top universities in the country) lashed out against England’s black footballers claiming they catch a case of jungle fever as soon as they get rich.

Currently, every black footballer in the national team, excluding Emile Heskey, is in an interracial relationship.

In relation to this, Mr Nworah said: “There is a consistent trend amongst successful black men in the UK, abandoning sisters from their ‘hood, choosing instead to cross over the street and find their love matches amongst white chicks. This habit usually surfaces whenever the going gets good for the brothers, that is when they suddenly realise that their black sisters ‘goods’ aren’t good enough anymore.”

What seems to anger Mr Nworah most is that black footballers are not opening the door for black women to enter a celebrity world which has launched successful careers for  the likes of Coleen Rooney and Alex Curran. He even suggested that Britain’s black women should protest outside the headquarters of the Football Association (F.A) and demand they launch an enquiry “into the growing trend of black footballers abandoning their roots.” 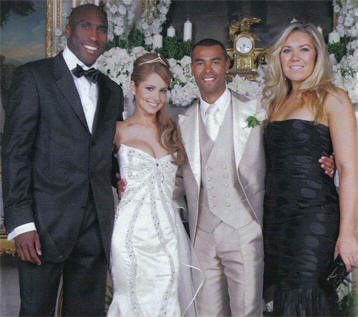 In the article, published on Nathanielturner.com, he continued to argue that it should be black women partying in Britain’s most prestigious nightclubs and spending thousands in the finest west end boutiques.

Mr Nworah clearly disputes any possibility that England’s black footballers engage in interracial relationships out of love, but rather because they see their white girlfriends as a ticket into a higher class of English society which previously didn’t want them.

Christian Reid, a member Sheffield University Afro Caribbean society, said: “It saddens me too think that some people are still hung up on interracial relationships. It’s about time people realised that love doesn’t have a colour.  In 2010, when most media coverage given to ethnic minorities is on crime watch, we should be proud that black footballers regularly account for half of the national football team despite the fact that black men only make up approximately 4% of the national population. That is a phenomenal figure but black people would rather find a fault in a perfect picture, than admire it.”

Latisha Carter, a dance student at the University of Leeds said: “As much as I would like to see black W.A.G.S, could you really imagine a black Posh and Becks? It just wouldn’t work. Black women are too independent and strong to care who black footballers are dating. There is enough successful brothers out there to keep us occupied believe me! We come from a long line of women who have had to raise families all by themselves and play both the mother and father role. Were fighters, we aren’t trying to use no man as a stepping stone so let them just keep on doing what they’re doing.”

Inter racial relationships is an on-going debate. Below is an article taken from the London Evening standard 2002 - Send your feedback to This email address is being protected from spambots. You need JavaScript enabled to view it.

As a 35-year-old black man who has been sexually active for almost 20 years, it's fair to say I've dated more than my fair share of white women. I was married to one, had a child with another, and am now dating a woman who has red hair and happens to be Jewish. The majority of my long-term relationships have been with white women.

I'll probably get lynched by black women for writing about why, over the years, I've dated so many white females, but here goes. I've heard every cliche there is on the subject and have been accused of "selling out" enough times to have the strength of character to define myself by who I am, not who I choose to sleep with.

Do I have an unhealthy predilection for white flesh; do I have I have identity issues; am I ashamed of my "race"; or am I on the make (as a struggling author and because of the media circles I move in, most of the women I meet are well-heeled professionals)? None of the above. But as a black man living in a predominantly white environment, what am I supposed to do, don a bow tie, flog The Final Call outside Brixton Tube and build myself a mud hut in order to "keep it real"?

Black women in particular give me a hard time when they see me out with my white girlfriend. On the rare occasions that I have been to a black event with a white woman on my arm, I have felt tension, and had some dismissive looks. They accuse me of acting like a Premiership footballer just because I've had one or two blonde girlfriends.

They tell me I've "got a thing for white girls" because they're an "easy ride". Believe me, no woman is an easy ride, but I have to admit there is a grain of truth in this statement. Black women do tend to give us a hard time. When I have dated black women, I've been dumped for demonstrating a lack of "consciousness" - ie, I don't hate white people enough and I've had my advances spurned by numerous headwrap-wearing "black sisters" after admitting to "tupping the white ewe", as Iago put it in Othello.

Black men are usually a lot less critical of interracial relationships, mainly because at any given moment 50 per cent of them are in one.

I'm often asked why so many of us date white women. Undoubtedly there are those who have a preference for white women, much as they might have a fetish for tall women, or busty ones. White women are as exotic to black men as say Asian or oriental women are to white men. But I cite approachability as a factor when it comes to why I date white women. They just don't have as many hang-ups.

Despite the bump-and-grind sexual posturing of innumerable hip-hop videos, which portray black women as living, breathing sex toys, they tend to be conservative and surprisingly old-fashioned.

White women are reaping the benefits of the feminist movement far more then their black peers - they appear to have a greater freedom and control over their sexuality. Black women, specifically Afro-Caribbean ones, good Christian girls that they are, are pretty strait-laced when it comes to sex.
They expect you to pick them up, pay for dinner, and drop them off at the front door with no more than a peck on the cheek. Whereas white women are often more daring, adventurous and self assured in the bedroom.

This conservatism also extends to the dating ritual. Most of the black women I come into contact with are obsessed with how much money you earn; they have bought into the American claptrap spouted by the likes of Destiny's Child in Independent Woman. Most black men find they have to jump through burning hoops to get with a black woman. If you ain't got the car, the yard, the career, the bling-bling then don't think
about asking me out.

Of course, there is a tradition of black women being financially responsible: they are often the sole or main breadwinner, perhaps because black men don't always get the career breaks that they do. Black women tend to buy into the propaganda that portrays us as being useless, and don't always cut us a lot of slack.

Going out with a white woman isn't, for me, some kind of trendy boho fashion statement. When I had a daughter with a white woman,it brought home to me the consequences of my actions: that I had brought a child into a world that is far from reconciling its racial and cultural differences. Perhaps when my daughter is my age she'll have other, less daunting moral imperatives to deal with.

Is it a matter of social acceptance? Is it just love that bases these relationships? Do Black women have an attitude? Send your views to This email address is being protected from spambots. You need JavaScript enabled to view it.  or use the contact us section on the website and fill out the contact form.

Nobody has to know